This item is a 2 1/2" X 3 1/2" color Beverly Hillbillies trading card -#6 from the 1960's. The trading card features a color photo of Buddy Ebsen and Donna Douglas on the front.The Beverly Hillbillies is an American television sitcom. Panned by many entertainment critics of its time, it quickly became a ratings success for CBS. The series was about a hillbilly family transplanted to Beverly Hills, California after finding oil on their land. A Filmways production, the series aired on CBS from September 26, 1962  September 7, 1971 and comprises 274 episodes106 in black-and-white (19621965) and 168 in color (19651971). The show starred Buddy Ebsen as Jed Clampett, Irene Ryan as Daisy May "Granny" Moses, Donna Douglas as Elly May Clampett and Max Baer, Jr. as Jethro Bodine. It, and country-cousin series Green Acres, are the most syndicated "fish out of water" shows to date, and were followed by similarly-themed shows such as "McCloud", "The Nanny", "The Fresh Prince of Bel-Air", and "Doc". It ranked among the top 12 most watched series on television for seven of its nine seasons, twice ranking as the #1 series of the year, with a number of episodes that remain among the most-watched television episodes of all time. The trading card has been autographed on the front by Buddy Ebsen and Donna Douglas................BOTH TRADING CARD AND AUTOGRAPHS ARE IN VERY GOOD CONDITION............. 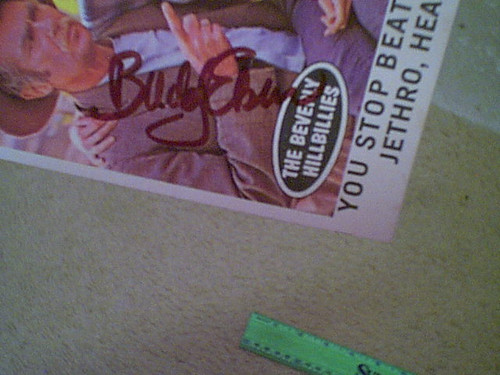