This item is an 8" X 10",color photo of the cast of the "Beverly Hills 90210" Television Series.Beverly Hills, 90210 is an American drama series that originally aired from October 4, 1990 to May 17, 2000 on Fox and was produced by Spelling Television in the United States, and subsequently on various networks around the world. It is the first series in the Beverly Hills, 90210 franchise. The show followed the lives of a group of teenagers living in the upscale, star-studded community of Beverly Hills, California and attending the fictitious West Beverly High School and, subsequently, the fictitious California University after graduation. The show was created by Darren Star and executive producers Aaron Spelling and E. Duke Vincent. The "90210" in the title refers to one of the city's five ZIP codes.The color photo has been autographed by Jason Priestley Tori Spelling Jennie Garth Brian Austin Green...........BOTH PHOTO AND AUTOGRAPHS ARE IN VERY GOOD CONDITION. 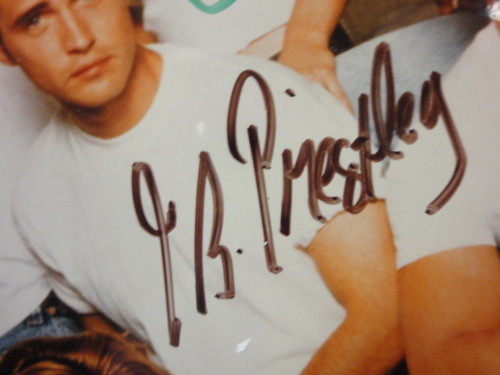