THIS IS AN AUTHENTICALLY AUTOGRAPHED LP BY ERIC BENTLEY.. BENTLEY ON BRECHT-SONGS AND POEMS OF THE GREAT GERMAN WRITER BERTOLT BRECHT-ADAPTED AND PERFORMED BY ERIC BENTLEY(RIVERSIDE RM 7017)PHOTO COVER IS SIGNED BY ERIC BENTLEY. CONDITION OF THE VINYL,COVER, AND AUTOGRAPH IS VERY GOOD. Eric Bentley (born September 14, 1916 in Bolton, Lancashire, England) is a renowned critic, playwright, singer, editor and translator. He became an American citizen in 1948, and currently lives in New York City. In 1998 he was inducted into the American Theatre Hall of Fame; he is also a member of the New York Theater Hall of Fame, in recognition of his years of performances in cabarets. In addition to teaching at Columbia University, which he joined in 1953, Bentley was in the 1950s a theatre critic for The New Republic, known for his blunt style of theatre criticism. Tennessee Williams and Arthur Miller threatened to sue Bentley for his unfavorable reviews of their work, but abandoned the attempt. Bentley met Bertolt Brecht at UCLA as a young man and is considered one of the pre-eminent experts on Brecht, whose work he has translated. He edited the Grove Press issue of Brecht's work, and made two albums of Brecht songs for the legendary Folkways Records label, most of which had never been recorded in English before. In 1969, Bentley came out of the closet and declared his homosexuality. In an interview in the New York Times on 12 November 2006, he says he was married twice before coming out at age 53, and deciding, at the same time, to leave his post at Columbia to concentrate on his writing. He has stated his being gay as an influence on his theater work, especially his play Lord Alfred's Lover. He has written many critical books, including A Century of Hero-Worship, The Playwright as Thinker, Bernard Shaw, What is Theatre?, The Life of the Drama, Theatre of War, Brecht Commentaries, and Thinking about the Playwright. He has also edited The Importance Of Scrutiny (1964), a collection of pieces from a now defunct critical magazine, and Thirty Years of Treason: Excerpts from Hearings Before the House Committee on Un-American Activities, 19381968 (1971). His most-produced play, Are You Now Or Have You Ever Been (more properly Are You Now or Have You Ever Been: The Investigations of Show-Business by the Un-American Activities Committee 1947-1958), published in 1972, was based on these texts. [1] Another play, Lord Alfred's Lover, treats on Oscar Wilde. 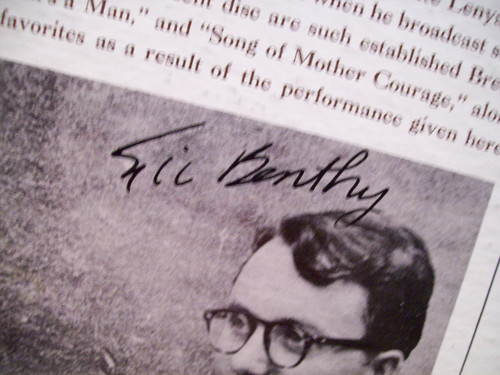