THIS IS AN AUTHENTICALLY AUTOGRAPHED PLAYBILL BY ED BEGLEY.. THIS IS A 5 1/2 INCH BY 9 INCH PLAYBILL FROM THE 54TH STREET THEATRE-MARCH 1959-LOOK HOMEWARD, ANGEL-PHOTO COVER IS SIGNED BY ED BEGLEY-HAS ORIGINAL TICKET STUB-CONDITION OF THE PLAYBILL, TICKET STUB AND AUTOGRAPH IS VERY GOOD. Born in Hartford, Connecticut, Begley began his career as radio actor while in his teens. He later acted in roles as Sgt. O'Hara in the radio show The Fat Man. Begley then progressed to Broadway. His radio work included a stint as Charlie Chan and Stroke of Fate amongst other roles. He also starred in the 1950s radio program Richard Diamond, Private Detective, playing Lieutenant Walter Levinson, head of homicide at the 5th Precinct, Manhattan. In the late 1940s, he began appearing regularly in supporting roles in films. He won the Academy Award for Best Supporting Actor for his role in Sweet Bird of Youth (1962). Some of his other notable films include 12 Angry Men (1957) and The Unsinkable Molly Brown (1964). He also worked extensively in television, appearing in guest roles in such programs as Bonanza and Target: The Corruptors!. Begley married three times. He is the father of the actor and environmental advocate Ed Begley, Jr. He died of a heart attack in Hollywood, California. He is buried at the San Fernando Mission Cemetery in Mission Hills, California. 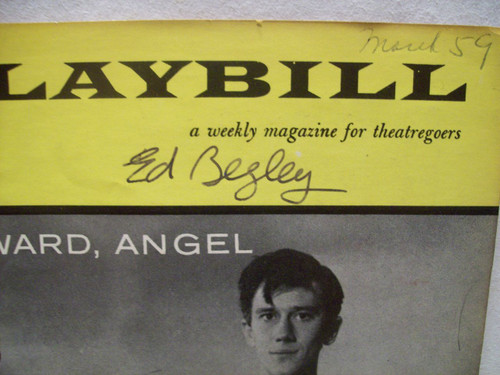