Beatles Beatles Beatles Beatles LTD USA Tour Concert Program-This is an original authentically signed program from the Beatles 1964 U.S. tour--it is 12" X 12" with 24 pages. The program was sold in  1964 to coincide with the US tour.  It is packed with 22 pages of fabulous candid and studio photos of the band.

Beatles, The, English rock music group formed in the late 1950s and disbanded in 1970. The members were John (Winston) Lennon, 1940–80, guitar and harmonica; (James) Paul McCartney, 1942–, guitar and piano; George Harrison, 1943–2001, guitar and sitar; and Ringo Starr (Richard Starkey), 1940–, drums. All were born in Liverpool, England. The Beatles dominated rock music in the 1960s, eventually disbanding when they felt their possibilities as a group were exhausted. The lyrics and music for most of their songs were written by Lennon and McCartney. Their initial appeal derived as much from their wit, Edwardian clothes, and moplike haircuts as from their music.  From 1963 to 1970 the group released 18 record albums that clearly document its musical development. The early recordings, such as Meet The Beatles (1964), are remarkable for their solid rhythms and excitingly rich, tight harmony. The middle albums, like Rubber Soul (1965) and Revolver (1966), evolved toward social commentary in their lyrics (Eleanor Rigby, Taxman) and introduced such instruments as the cello, trumpet, and sitar. In 1967, Sgt. Pepper's Lonely Hearts Club Band marked the beginning of The Beatles' final period, which is characterized by electronic techniques and allusive, drug-inspired lyrics. The Beatles' musical experimentation in the recording studio involved all of the members as well as their most important collaborator, their producer and audio engineer George Martin (1926–2016). The group acted and sang in four films: A Hard Day's Night (1964), Help! (1965), Magical Mystery Tour (1968), and Let It Be (1970), which are notable for their exuberance, slapstick, and satire. They also were animated characters in the full-length cartoon, Yellow Submarine (1968). After they disbanded, all the band members continued to compose and record songs. The concert tour program has been autographed on their photos on the inside of the program by John Lennon, Paul McCartney,George Harrison and Ringo Starr...................BOTH PROGRAM AND AUTOGRAPHS ARE IN EXCELLENT CONDITION. 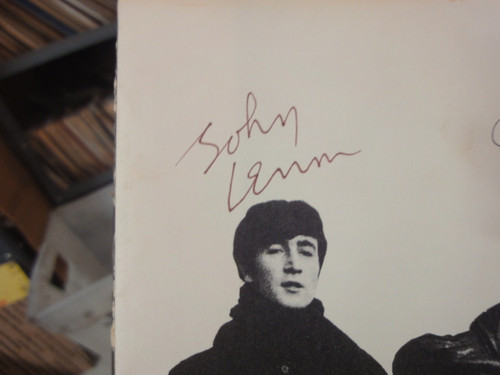