This item is a 9 1/2" X 13",black and white lithograph photo of actress Annette Bening.Actress Annette Bening is the Oscar-nominated star of 1999's American Beauty and the 2010 film The Kids Are Alright. She's also known for her high-profile marriage to fellow actor Warren Beatty. Annette Bening began her career on the stage in San Diego, San Francisco and New York. She was nominated for a Tony for her performance in the play Coastal Disturbance (1987), and early in her movie career she received rave reviews and an Oscar nomination for her role in The Grifters (1990, starring John Cusack). During the 1990s she appeared in big-budget dramas and comedies, including Regarding Henry (1991, opposite Harrison Ford), Bugsy (1991, starring Warren Beatty), The American President (1995, with Michael Douglas) and Mars Attacks! (1996, with Jack Nicholson). Since then she's spent her time raising four kids with Beatty (they were married in 1992) and making the occasional film, including Open Range (2003, starring Kevin Costner) and The Women (2008, with Meg Ryan). Annette Bening was nominated for an Oscar as best actress in the 2010 family-life drama The Kids Are Alright.The lithograph photo has been autographed on the front by Annette Bening..............BOTH PHOTO AND AUTOGRAPH ARE IN VERY GOOD CONDITION. 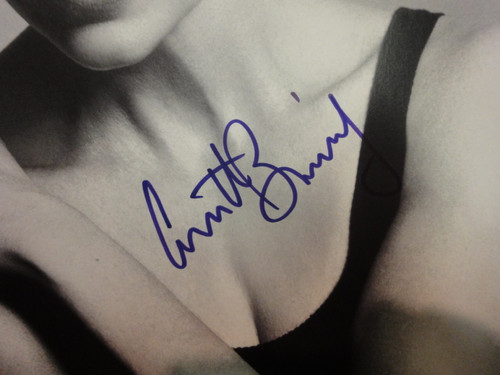