"That Old Feeling"-1937-Leo Feist-sheet music. This song is featured in the 1937 Movie-"Vogues of 1938" starring Warner Baxter and Joan Bennett.An early Technicolor musical that concentrates on the fashions of the late 1930s, this film was reissued under the title All This and Glamour Too. The top models of the era, including several who are advertising household products, are in the cast. The plot centers around a chic boutique, whose owner, George Curson (Warner Baxter), tries hard to please his customers while keeping peace with his unhappy wife. A wealthy young woman, Wendy Van Klettering (Joan Bennett), decides to take a job as a model at the fashion house, just to amuse herself, but her presence annoys Curson, who must put together the best possible show to compete with rival fashion houses at the Seven Arts Ball. The film includes several hit songs, including the Oscar-nominated "That Old Feeling" by Sammy Fain and Lew Brown.The sheet music has been autographed on the front cover by Warner Baxter with a fountain pen in blue and Joan Bennett with a fountain pen in black..........BOTH SHEET MUSIC AND AUTOGRAPHS ARE IN VERY GOOD CONDITION................................... 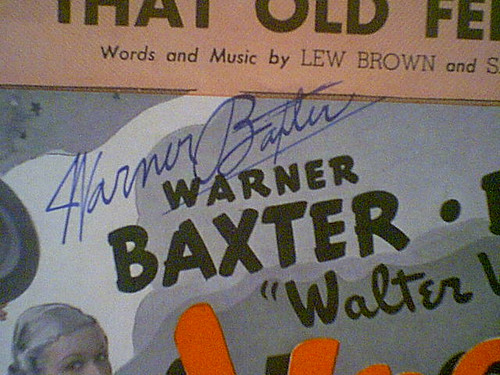