This item is a 5' X 7" vintage fan club photo of actor Richard Barthelmess. Richard Semler Barthelmess (May 9, 1895 – August 17, 1963) was an American film actor, principally of the Hollywood silent era. He starred opposite Lillian Gish in D. W. Griffith's Broken Blossoms (1919) and Way Down East (1920) and was among the founders of the Academy of Motion Picture Arts and Sciences in 1927. The following year, he was nominated for the Academy Award for Best Actor for two films: The Patent Leather Kid and The Noose. Barthelmess soon became one of Hollywood's higher paid performers, starring in such classics as The Patent Leather Kid in 1927 and The Noose in 1928; he was nominated for Best Actor at the first Academy Awards for his performance in both films. In addition, he won a special citation for producing The Patent Leather Kid.With the advent of the sound era, Barthelmess remained a star for a number of years. He played numerous leads in talkie films, most notably Son of the Gods (1930), The Dawn Patrol (1930), The Last Flight (1931), The Cabin in the Cotton (1932) and Heroes for Sale (1933). He was able to choose his own material and often played in controversial or socially conscious films. However, his popularity began to wane in the 1930s as he was getting too old for the boyish leads he usually played, and in his later films between 1939 and his retirement in 1942, he turned towards character roles – most notably in his supporting role as the disgraced pilot and husband of Rita Hayworth's character in Only Angels Have Wings (1939). The fan club photo has been autographed on the front by Richard Barthelmess in black.....................BOTH PHOTO AND AUTOGRAPH ARE IN VERY GOOD CONDITION. 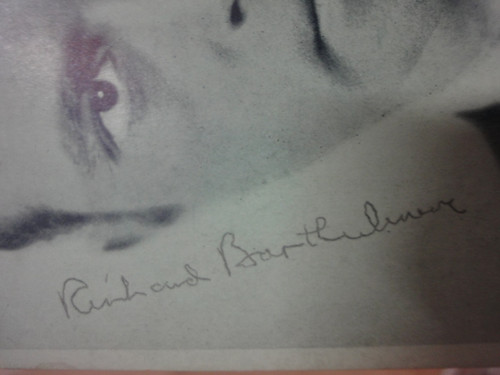