P. T. Barnum-"The Wild Beasts Birds And Reptiles Of The World The Story Of Their Capture"-1889-R.S. Peale & Company-7" X 10"-510 pages-Hardcover Book-With Photo And Illustrations-Signed By Author. P. T. Barnum, famous circus owner wrote this book in the "evening" of his life. He wrote, "my heart is young and the sweetest music in my ear is the merry laughter of childhood. Before the parents of many of you were born, I entered upon my career as a manager of public exhibitions...I have gathered from every point of the habitable globe the most marvelous curiosities in the realms of science, art, invention and the animal kingdom and I am still adding to my collection." In this book, he tells of the capture of animals, birds and reptiles. The book has many beautiful black and white illustrations......................Barnum, P. T. (Phineas Taylor Barnum) 1810–91, American showman, b. Bethel, Conn. As a youth Barnum worked at diverse sales jobs and managed a boardinghouse. He made his first sensation in 1835 when he bought and exhibited Joice Heth, a slave who claimed she was 161 years old (she was about 80) and had been the nurse of George Washington. In 1842 he opened the American Museum in New York City in an attempt to rapidly make money, and immediately became famous for his extravagant advertising and his exhibits of freaks. Among his great attractions were the mummified Fiji Mermaid (formed by joining the upper half of a monkey to the tail end of a fish), General Tom Thumb, who was viewed by over 20 million people in the United States and Europe, and the original Siamese Twins, Chang and Eng (see conjoined twins). Also exhibited were wax figures, sculptures, and animals, both alive and preserved. In 1850, Barnum managed the American tour of the Swedish singer Jenny Lind and, with his talent for publicity, made it a huge financial success for her and for himself. In 1855 he retired from show business; he served as mayor of Bridgeport, Conn., and in the Connecticut legislature. Driven into bankruptcy by unwise business ventures, he reopened the American Museum and then organized his famous circus, The Greatest Show on Earth, which opened in Brooklyn, N.Y., in 1871. In 1881 he merged with his most successful competitor, James A. Bailey, and under the name Barnum and Bailey the circus continued for a generation after Barnum's death. The stellar attraction of the circus was Jumbo, the 6 1⁄2-ton African elephant that Barnum purchased from the London Zoo. The book has been autographed on the title page by P. T. Barnum..........CONDITION OF THE AUTOGRAPH AND ILLUSTRATIONS IS EXCELLENT. THE BOOK HAS A LOOSE SPINE AND IS USED. 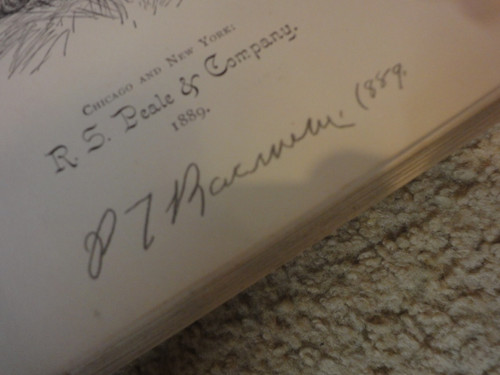