This item is a 10 1/2" X 13",black and whitelithograph photo of the artist Balthus.Balthus was a French painter in the second half of the 20th century, famous for his somewhat disturbing paintings of pubescent girls and for his association with some of the greats in modern art, including Pablo Picasso and Salvador Dali. Balthus painted figures and landscapes in a more traditional style than his cubist and surrealist contemporaries, and throughout his career was supported primarily by other artists and dealers. He claimed to be a count, but he was also known to be a prankster who fabricated biographical details while keeping his real life story a mystery. In the 1970s the exhibition of The Guitar Lesson in New York caused a controversy (the painting depicts a suggestive act between a teacher and pupil) and became his most famous work as a result. In his later years he rarely granted interviews and lived in near isolation in Switzerland with his family.The lithograph photo has been autographed on the front by Balthus...................BOTH PHOTO AND AUTOGRAPH ARE IN VERY GOOD CONDITION. 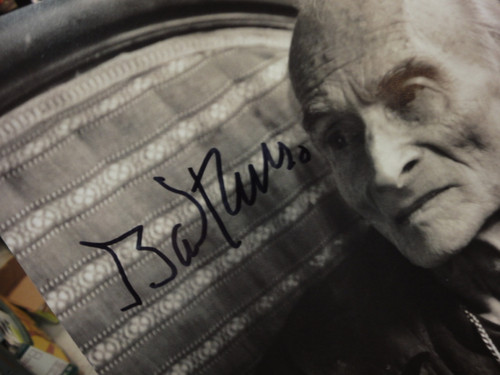