Pearl Bailey-"The Raw Pearl"-1969-Pocket Books-4" X 7"-189 pages-Softcover Book-With Photos-Signed By Author.Spirited black singer and actress of stage and screen, Bailey is the daughter of a preacher. She started her performing career at age 15 after winning an amateur contest, then went on to tour as a dancer appeared as a singer-dancer with various jazz bands. Her big break came with her debut on Broadway in the musical St. Louis Woman; her performance earned her a "most promising newcomer of 1946" award. Bailey became known for her throaty, sexy voice, down-to-earth personality, and jokey mischievousness. Her screen debut came as a guest star in Variety Girl, in which she sang "Tired," her first major hit. She eventually appeared in a number of stage and screen musicals, as well as landing several straight roles. In the late '60s she was awarded a Tony for her work in the title role of the all-black version of Broadway's Hello Dolly! Bailey hosted her own TV variety show in 1971, but retired from show biz in 1975. Also in 1975, she was named to the U.S. delegation to the U.N. Her autobiography, The Raw Pearl, appeared in 1968. The book has been autographed on the title page by Pearl Bailey...............BOTH BOOK AND AUTOGRAPH ARE IN VERY GOOD CONDITION. 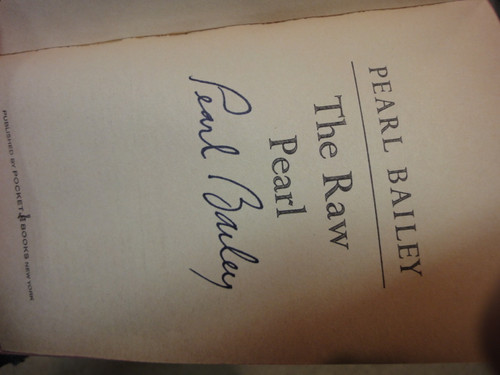