THIS IS AN AUTHENTICALLY AUTOGRAPHED PLAYBILL BY LAUREN BACALL.. PLAYBILL-PALACE THEATRE-1970-APPLAUSE STARRING LAUREN BACALL-FRONT COVER IS SIGNED BY LAUREN BACALL. CONDITION OF THE PLAYBILL AND AUTOGRAPH IS VERY GOOD. Lauren Bacall (born Betty Joan Perske; September 16, 1924) is an American film and stage actress and model, known for her husky voice and sultry looks. She is perhaps best known for being a film noir leading lady in such films as The Big Sleep (1946) and Dark Passage (1947), as well as a comedienne, as seen in 1953's How to Marry a Millionaire and 1957's Designing Woman. Bacall also enjoyed Tony-winning success in the Broadway musicals Applause in 1970 and Woman of the Year in 1981. Her performance in the movie The Mirror Has Two Faces (1996) earned her a Golden Globe Award and an Academy Award nomination. In 1999, Bacall was ranked as one of the 25 actresses on the AFI's 100 Years... 100 Stars list by the American Film Institute. In 2009, she was selected by the Academy of Motion Picture Arts and Sciences to receive an Honorary Academy Award at the Academys inaugural Governors Awards. 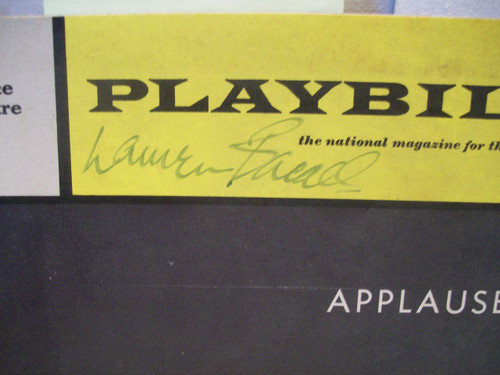