THIS IS AN AUTHENTICALLY AUTOGRAPHED SHEET MUSIC BY LAUREN BACALL AND HARRY GUARDINO... WE'RE GONNA WORK IT OUT-MUSIC BY JOHN KANDER-LYRICS BY FRED EBB-PHOTO COVER IS SIGNED BY LAUREN BACALL AND HARRY GUARDINO-CONDITION OF THE SHEET MUSIC AND AUTOGRAPHS IS VERY GOOD. Woman of the Year is a musical with a book by Peter Stone and score by John Kander and Fred Ebb. Based on the Ring Lardner Jr.-Michael Kanin screenplay for the 1942 Katharine Hepburn-Spencer Tracy film of the same name, the musical changes the newspaper reporters of the original to television personality Tess Harding and cartoonist Sam Craig, who experience difficulty merging their careers with their marriage. After eleven previews, the Broadway production, directed by Robert Moore, opened on March 29, 1981 at the Palace Theatre, where it ran for 770 performances. The cast included Lauren Bacall, Harry Guardino, Marilyn Cooper, Grace Keagy, and Roderick Cook. Raquel Welch filled in for Bacall during her two-week vacation and later replaced her in the run. Debbie Reynolds replaced Welch near the end of the run. Barbara Eden played Tess in the 1984 national tour. Sets were designed by Tony Walton and costumes were by Theoni V. Aldredge. John Canemaker created an animated cat that danced and sang with Guardino. Choreography was by Tony Charmoli. An Argentinian production premiered in 1983 and ran there for three consecutive years, followed by a revival in 1988, both productions with Susana Giménez playing the lead role. The musical is one of the most successful in Argentinian history and there are strong rumours of a second revival to be produced in 2010 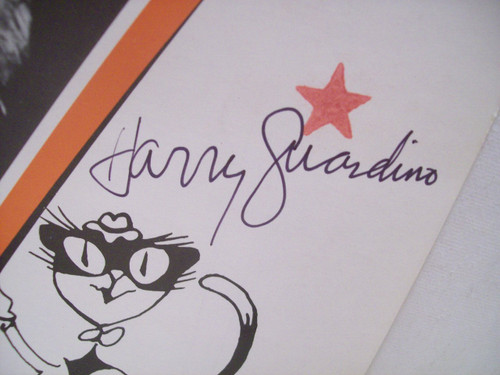