Playbill For The Royale Theatre-"Cactus Flower"-1966-6" X 9"-51 pages-theatre program. This vintage Playbill features the 1966 Broadway Play-"Cactus Flower" starring Lauren Bacall.Cactus Flower is a farce by Abe Burrows. It played for years on Broadway before being adapted by I.A.L. Diamond into a 1969 feature film directed by Gene Saks. Based on the play Fleur de cactus by Pierre Barillet and Jean-Pierre Gredy, the comedy focuses on the relationship between young, wild Toni and her older, married lover Julian, a dentist. Convinced the two have no future together, Toni attempts suicide, and a guilt-ridden Julian rashly proposes he leave his wife so the couple can be together. However, Julian has never revealed to Toni that his "marriage" is actually an elaborate lie concocted to keep Toni at arm's legth. Toni refuses to break up his household without first meeting and talking with Julian's soon-to-be-ex, so Julian enlists the aid of his shy spinster assistant Stephanie to pose as his non-existent wife. Complications arise when Toni decides the two must find her a new beau so everyone concerned can live happily ever after.After two previews, the Broadway production, directed by Burrows, opened on December 8, 1965 at the Royale Theatre, where it ran for two years and nine months before transferring to the Longacre, for a total run of 1234 performances. The original cast included Lauren Bacall, Barry Nelson, Brenda Vaccaro, and Burt Brinckerhoff. Lloyd Bridges, Kevin McCarthy, and Betsy Palmer were replacements later in the run. The Playbill has been autographed on the front by Lauren Bacall with a fountain pen in blue............BOTH PLAYBILL AND AUTOGRAPH ARE IN VERY GOOD CONDITION................ 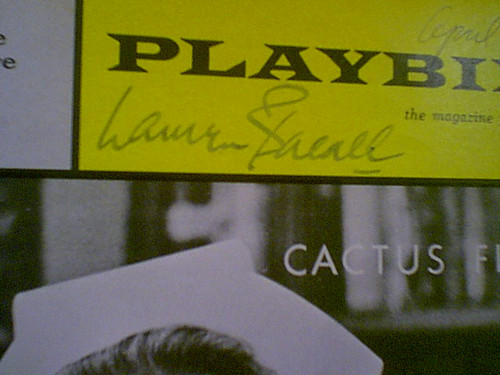