Tamara Faye Messner (née LaValley, formerly Bakker; March 7, 1942 – July 20, 2007) was an American evangelist, singer, author, talk show host, and television personality. She initially gained notice for her work with The PTL Club, a televangelist program she co-founded with her husband Jim Bakker in 1974. They had hosted their own puppet show series for local programming in Minnesota in the early 1970s; Messner also had a career as a recording artist. In 1978, she and Bakker built Heritage USA, a Christian theme park.Messner garnered significant publicity when Jim Bakker was indicted, convicted, and imprisoned on numerous counts of fraud and conspiracy in 1989, resulting in the dissolution of The PTL Club. She divorced Bakker in 1992 and married Roe Messner. She was diagnosed with colon cancer in 1996, from which she suffered intermittently for over a decade before dying of the disease in 2007. During her career Messner was noted for her eccentric and glamorous persona, as well as for moral views that diverged from those of many mainstream Evangelists, particularly her acceptance of LGBT persons and reaching out to HIV/AIDS patients at the height of the AIDS epidemic. The LP has been autographed on the front cover by Tammy Faye Bakker..................CONDITION OF VINYL, COVER AND AUTOGRAPH IS MINT MINUS. 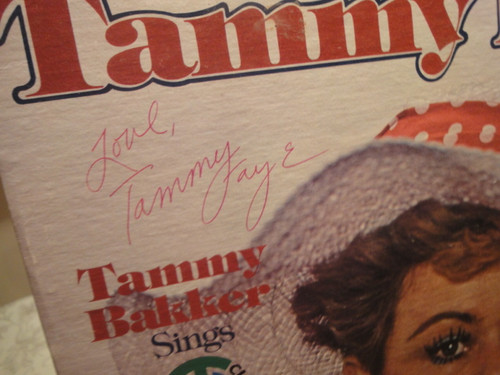