James Orsen Bakker (born January 2, 1940) is an American televangelist and convicted fraudster. Between 1974 and 1987, Bakker hosted the television program The PTL Club with his then wife, Tammy Faye, and developed Heritage USA, a now-defunct Christian theme park in Fort Mill, South Carolina.In the late 1980s, Bakker resigned from the PTL ministry over a cover-up of hush money to church secretary Jessica Hahn for an alleged rape. Subsequent revelations of accounting fraud brought about felony charges, conviction, imprisonment, and divorce. Bakker later remarried and returned to televangelism, founding Morningside Church in Blue Eye, Missouri, and reestablishing the PTL ministry. He currently hosts The Jim Bakker Show, which focuses on discussing biblical prophecy while promoting emergency survival products. Bakker has written several books, including I Was Wrong and Time Has Come: How to Prepare Now for Epic Events Ahead. The LP has been autographed on the front cover by Jim Bakker............................CONDITION OF VINYL, COVER AND AUTOGRAPH IS VG PLUS. 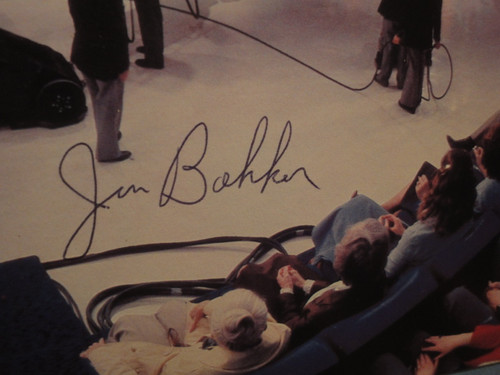