James Baldwin-"Go Tell It On The Mountain"-1963-Dial Press-5" X 8"-253 pages-Hardcover Book With Jacket-Signed By Author....James Arthur Baldwin (August 2, 1924  December 1, 1987) was an American novelist, playwright, essayist, poet, and activist. His essays, collected in Notes of a Native Son (1955), explore intricacies of racial, sexual, and class distinctions in the Western society of the United States during the mid twentieth-century. Some of Baldwin's essays are book-length, including The Fire Next Time (1963), No Name in the Street (1972), and The Devil Finds Work (1976). An unfinished manuscript, Remember This House, was expanded and adapted for cinema as the Academy Award-nominated documentary film I Am Not Your Negro (2016). One of his novels, If Beale Street Could Talk, was adapted into the Academy Award-winning film of the same name in 2018, directed and produced by Barry Jenkins. In 1953, Baldwin's first novel, Go Tell It on the Mountain, a semi-autobiographical piece was published. He began writing it when he was only seventeen. and first published in Paris. His first collection of essays, Notes of a Native Son appeared two years later. He continued to experiment with literary forms throughout his career, publishing poetry and plays as well as the fiction and essays for which he was known. The book has been autographed on the title page by James Baldwin. Please note that James Baldwin signed this book near the end of his life so there are tremors in the signature......................BOTH BOOK AND AUTOGRAPH ARE IN VERY GOOD CONDITION. 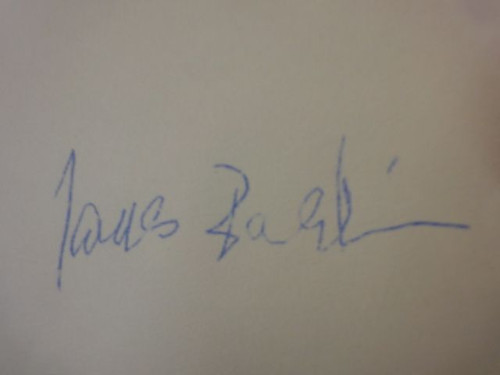