Playbill for The Palace Theatre-1984-"La Cage Aux Folles"-starring Gene Barry and George Hearn-Book by Harvey Fierstein-6" X 9"-98 pages-theatre program.La Cage aux Folles (French pronunciation: is a musical with a book by Harvey Fierstein and lyrics and music by Jerry Herman. Based on the 1973 French play of the same name by Jean Poiret, it focuses on a gay couple: Georges-played by Gene Barry-the manager of a Saint-Tropez nightclub featuring drag entertainment, and Albin, his romantic partner played by George Hearn-and star attraction, and the farcical adventures that ensue when Georges's son, Jean-Michel, brings home his fiancée's ultra-conservative parents to meet them.The PLaybill has been autographed on the front cover by Gene Barry,George Hearn and Harvey Fierstein..................BOTH PLAYBILL AND AUTOGRAPHS ARE IN VERY GOOD CONDITION. 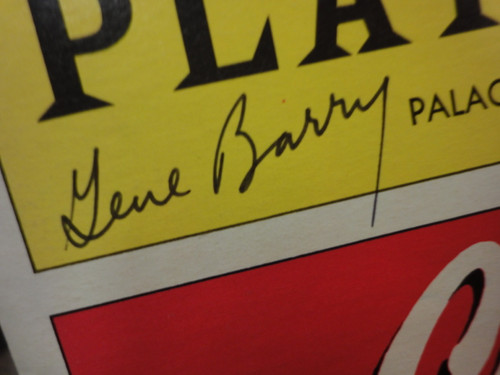