Song Hits Magazine-June 1954-33 pages. This vintage magazine-which originally sold for twenty five cents-features a cover photo of Eileen Barton.Pop songstress Eileen Barton remains best known for her 1949 novelty blockbuster "If I Knew You Were Comin', I'd've Baked a Cake." Born in Brooklyn, NY, on November 24, 1929, she was the daughter of vaudeville song-and-dance duo Benny and Elsie Barton, joining the family act at age two-and-a-half with a show-stopping rendition of "Ain't Misbehavin'." The Bartons appeared twice daily at Broadway's Palace Theatre, sharing marquees with the likes of Eddie Cantor, Rudy Vallee, and Milton Berle. In 1936, Berle cast Eileen as the mischievous Jolly Gillette on his CBS radio series, and the following year she made her film debut in Show for Sale. After serving as Nancy Walker's understudy on 1941's Best Foot Forward, Barton toured alongside Elaine Stritch in Angels in the Wings. Meanwhile, as his own performing career waned, Benny Barton reinvented himself as a song-plugger, and in 1943 delivered the Al Hoffman/Carl Lampi/Jerry Livingston composition "Close to You" to Frank Sinatra. The matinee idol was so smitten with the song that he agreed to finance a publishing company with Barton at the helm, and in the years to follow Barton Music published many of Sinatra's biggest hits, most notably "Nancy with the Laughing Face" and "Put Your Dreams Away." Sinatra also boosted the career of Eileen Barton, inviting her to appear during his 1944 residency at New York's Paramount Theatre. They also appeared together on radio's Lucky Strike Presents Your Hit Parade, recording a handful of duets including "Together" and "Come Out Wherever You Are." The magazine has been autographed on the front cover by Eileen Barton....................BOTH MAGAZINE AND AUTOGRAPH ARE IN AVERAGE CONDITION..................... 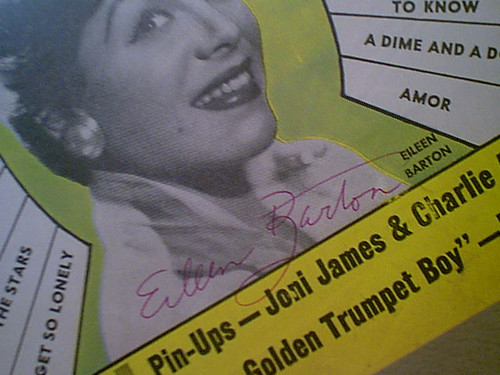