The Bangles-"Everything Everywhere"-1988-16 pages-9" X 14"-Color Souvenir And Concert Program.The Bangles are an American all-female band that originated in the early 1980s, scoring several hit singles during the decade.Susanna Hoffs joined sisters Vicki and Debbi Peterson to form a band in Los Angeles in December, 1980. The trio briefly christened itself The Colours, then renamed itself The Supersonic Bangs, and shortly afterwards The Bangs. The band was part of the Los Angeles Paisley Underground scene, which featured groups that played a mixture of 1960s-influenced folk-rock and jangle pop with a more modern punk–ish/garage band undertone. In 1981, the threesome recorded and released a single ("Getting Out Of Hand" b/w "Call on Me") on DownKiddie Records (their own label). In 1981 Susanna Hoffs asked her friend, Patrick Hirtz, to manage the band. Patrick Hirtz later left the band to pursue the culinary arts. In 1982, the trio was signed to Faulty Products, a label formed by Miles Copeland.The early Bangles line-up of Susanna Hoffs (vocals/guitars), Vicki Peterson (guitars/vocals), Debbi Peterson (vocals/drums) and Annette Zilinskas (vocals/bass) recorded an EP in 1982, and released the single "The Real World". A legal issue forced the band to change their name at the last minute so they dropped "The" and added the letters "les" to the end to become Bangles. Their first EP was retitled Bangles and released. In 1983, Faulty Products issued a 12 inch "remix" single of "The Real World" to radio and media, but another setback came as the label folded. I.R.S. Records picked up distribution and re-issued the EP. After Zilinskas left the band to focus on her own project Blood on the Saddle, she was replaced by Michael Steele, formerly of the all-girl band The Runaways, Toni & The Movers, Slow Children and Elton Duck.The concert program has been autographed on the front cover by Vicki Peterson,Debbie Peterson and Susanna Hoffs.............BOTH CONCERT PROGRAM AND AUTOGRAPHS ARE IN VERY GOOD CONDITION. 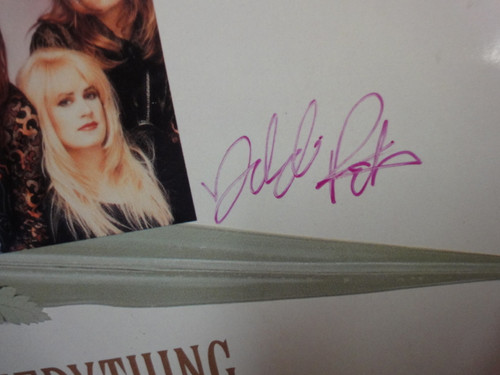