Dave Barry-"Dave Barry In Cyberspace"-1996-Crown Pub.-5" X 8"-215 pages-Hardcover Book-Signed By Author.Dave Barry's offbeat humor column ran in The Miami Herald from 1983-2005 and won the Pulitzer Prize for Commentary in 1988. Barry's specialty is a mix of stream-of-consciousness wisecracks and chortling commentary on home life, politics, low-flow toilets and other vital issues of the day, often with Barry himself as the butt of the joke. He's known for columns on strange news items like exploding whales or flaming Pop-Tarts, often introduced with his wry disclaimer, "I am not making this up." Barry graduated from Haverford College in Pennsylvania in 1969; his first newspaper job was as a reporter for the West Chester (PA) Daily Local News. After he was hired by The Miami Herald, widespread syndication of his work made him one of America's most popular humor columnists. He also found time to write more than two dozen books, including Babies and Other Hazards of Sex (1984), Dave Barry's Complete Guide to Guys (1995) and Dave Barry's Book of Bad Songs (1997). He took a leave of absence from writing his column in 2005. At the end of that year he announced that he would not return to writing a regular column, though he would continue writing occasional newspaper pieces as well as books. The Miami Herald has continued to run his archived columns from past years. The book has been autographed on the title page by Dave Barry..................BOTH BOOK AND AUTOGRAPH ARE IN VERY GOOD CONDITION................... 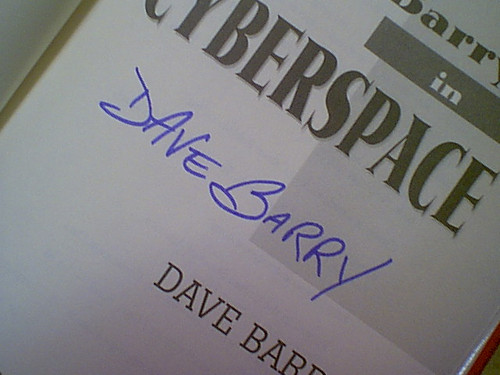