Arthur James Balfour-"Essays Speculative And Political"-1921-George Doran-5 1/2" X 8 1/2"-240 pages-Hardcover Book-Signed By Author. Balfour, Arthur James Balfour, 1st earl of, 18481930, British statesman; nephew of the 3d marquess of Salisbury. He entered parliament as a Conservative in 1874 and served as secretary to his uncle at the Congress of Berlin (1878). Although associated with the "Fourth Party" of Lord Randolph Churchill, he remained close to Salisbury, serving as president of the Local Government Board (188586) and secretary for Scotland (1886). As chief secretary for Ireland (188791) Balfour was a resolute opponent of the Home Rule movement and suppressed riots, but he worked for agrarian reform.In 1891 he became Conservative leader in the House of Commons and served (189192, 18951902) as first lord of the treasury. He succeeded his uncle as prime minister in 1902. His government achieved educational reform (1902), passed the Irish Land Purchase Act (1903), created the Committee of Imperial Defence (1904), and inaugurated the Franco-British Entente (1904). However, the Conservative party split over tariff protection advocated by Joseph Chamberlain. Balfour resigned in 1905, and his party was overwhelmingly defeated in the 1906 election. He continued as leader of the Conservatives during the disputes over the 1909 budget and the reform of the House of Lords but resigned in 1911.Balfour was first lord of the admiralty (191516) in Herbert Asquith's coalition government and became (1916) foreign secretary under David Lloyd George. In this capacity he issued the Balfour Declaration (1917), pledging British support to the Zionist hope for a Jewish national home in Palestine, with the proviso that the rights of non-Jewish communities in Palestine would be respected (see Zionism). He attended the Versailles peace conference and, as lord president of the council (191922), represented Britain at the first meeting of the League of Nations in 1920 and at the Washington Conference on limiting naval armaments in 192122. Created earl of Balfour in 1922, he was again lord president of the council (192529).Balfour was a brilliant intellectual and an effective public official, devoted to the cause of international peace. His philosophical writings, which explore the problems of modern religion, include The Foundations of Belief (1900), Theism and Humanism (1915), Theism and Thought (1923), and Opinions and Arguments (1927).The book has been autographed on the title page by Arthur James Balfour with a fountain pen in blue/black ink....................BOTH BOOK AND AUTOGRAPH ARE IN VERY GOOD CONDITION. 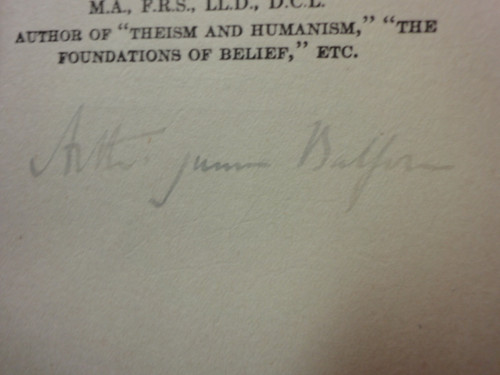