"Selected Plays And Prose of Amiri Baraka/LeRoi Jones"-1979-William Morrow-New York-5 1/2" X 8"-275 pages-paperback book-First Edition-Signed By Author.Amiri Baraka (born October 7, 1934) is an American writer of poetry, drama, essays and music criticism.In 1967 he became a lecturer at San Francisco State University. In 1968 he was arrested in Newark for illegally carrying a weapon and resisting arrest during riots following the assassination of Martin Luther King and sentenced to three years in prison. Shortly afterwards an appeal court threw out the sentence. The same year his second book of jazz criticism Black Music came out, a collection of previously published music journalism, including the seminal Apple Cores columns from Down Beat magazine. In 1970 he strongly supported Kenneth Gibson's candidacy for mayor of Newark; Gibson was elected the city's first Afro-American Mayor. In the late 1960s and early 1970s Baraka courted controversy by penning some strongly anti-Jewish poems and articles, similar to the then stance of the Nation of Islam. Around 1974 Baraka distanced himself from Black nationalism and became a Marxist and a supporter of anti-imperialist third world liberation movements. In 1979 he became a lecturer at SUNY for the Africana Studies Department. The same year, after altercations with his wife, he was senteced to a short period of compulsory community service. Around this time he began writing his autobiography. In 1980 he denounced his former anti-semitic utterances, declaring himself an anti-zionist.In 1984 Baraka became a full professor. In 1987, together with Maya Angelou and Toni Morrison, he was a speaker at the commemoration ceremony for James Baldwin. In 1989 he won an American Book Award for his works as well as a Langston Hughes Award. In 1990 he co-authored the autobiography of Quincy Jones, and 1998 was a supporting actor in Warren Beatty's film Bulworth. In 1965, Baraka wrote: "Most American white men are trained to be fags. For this reason it is no wonder their faces are weak and blank.  The average ofay [white person] thinks of the black man as potentially raping every white lady in sight. Which is true, in the sense that the black man should want to rob the white man of everything he has. But for most whites the guilt of the robbery is the guilt of rape. That is, they know in their deepest hearts that they should be robbed, and the white woman understands that only in the rape sequence is she likely to get cleanly, viciously popped." The book has been autographed on the title page by Amiri Baraka in blue..........................................BOTH BOOK AND AUTOGRAPH ARE IN NICE CONDITION............... 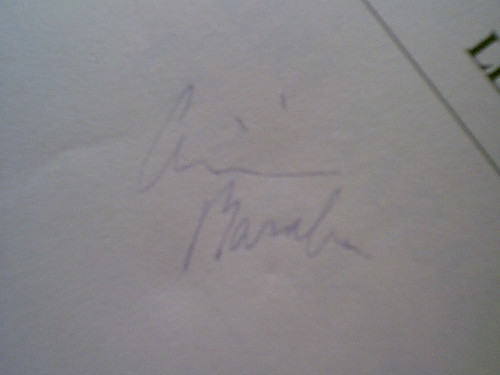