This item is a 5" X 7",black and white lithograph photo of actor Alec Baldwin.Alexander Rae "Alec" Baldwin III (born April 3, 1958) is an American actor who has appeared on film, stage, and television.Baldwin first gained recognition through television for his work in the soap opera Knots Landing in the role of Joshua Rush. He was a cast member for two seasons (6 and 7) before his character was killed off. The series aired on CBS from 1979 to 1993. He has since played both leading and supporting roles in films such as Beetlejuice (1988), The Hunt for Red October (1990), Thomas and the Magic Railroad (2000), Final Fantasy The Spirits Within (2001), The Aviator (2004) and The Departed (2006). His performance in the 2003 film The Cooler garnered him a nomination for the Academy Award for Best Supporting Actor.Since 2006 he has starred as Jack Donaghy on the NBC sitcom 30 Rock. He has received two Emmy Awards, three Golden Globe Awards, and six Screen Actors Guild Awards. He is the oldest of the Baldwin brothers working in Hollywood. The lithograph photo has been autographed on the front by Alec Baldwin...............BOTH PHOTO AND AUTOGRAPH ARE IN VERY GOOD CONDITION. 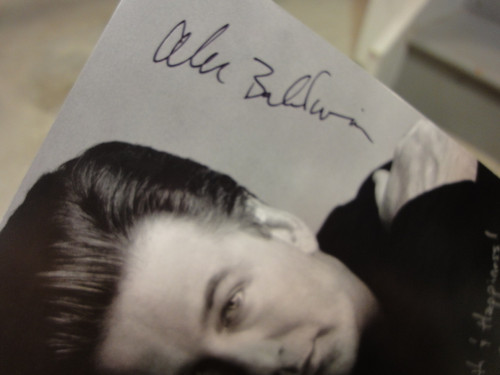