This item is an 8" X 10",black and white photo of Alec Baldwin and Ellen Greene in a scene from the 1988 Movie-"Talk radio". Also included is a set of 9-8" X 10" photos of original scenes from the movie.Monologist Eric Bogosian's one-man theatre piece Talk Radio, co-written by Bogosian and Ted Savinar, is searingly brought to the screen by Oliver Stone. Bogosian plays a provocateur radio talk-show host, whose constant espousal of his inflammatory views and ceaseless hectoring of his callers and listeners reaps equal parts love and hate. As his program rolls on, Bogosian is revealed to be just as screwed up as any of his fans, if not more. And then he pushes one caller just a bit too far. In co-adapting the play for the screen, Oliver Stone interweaves elements of Steven Singular's factual book Talked to Death, the story of a liberal Denver radio personality who was murdered at the behest of a militant right-wing hate group. One word of warning: if you're not a fan of the sort of radio depicted herein, chances are you won't warm up to this film. Talk Radio was the indirect inspiration for the 1990 TV series Night Caller. One photo has been autographed on the front by Alec Baldwin and Ellen Greene...........BOTH PHOTOS AND AUTOGRAPHS ARE IN AVERAGE CONDITION............... 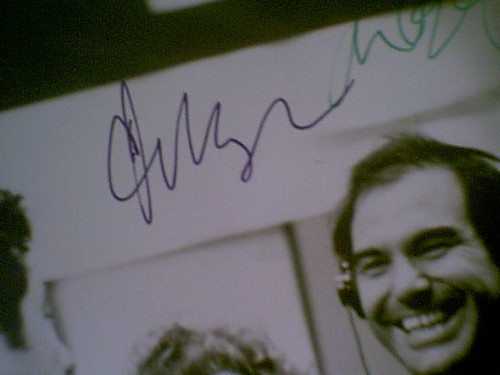