This item is an 8" X 10",black and white photo of actor Alec Baldwin in two scenes from the 1993 Movie-"Malice".Alec Baldwin stars in this thriller as Dr. Jed Hill, a brilliant young trauma specialist who begins to believe he can do no wrong after he saves the life of a patient given up for dead by another doctor. Jed runs into an old classmate, Andy Safian (Bill Pullman), who is now a college dean. Andy invites Jed to stay with him in the attic bedroom of a house he is renovating with his wife Tracy (Nicole Kidman). Tracy takes a dislike to Jed, whom she thinks is a psychotic egomaniac. In the mean time, Andy has to deal with a serial killer on the loose among the campus dorms. While Andy is helping belligerent law enforcement officials with the murder investigation and Jed is drinking straight shots at the local saloon, Tracy begins to have abdominal pains and is rushed to the emergency room. Jed comes directly from the bar and slices her open, removing more from her body cavity than he should. The allegations fly fast and furious between Tracy, Andy, and Jed. The photo has been autographed on the front by Alec Baldwin.....................BOTH PHOTO AND AUTOGRAPH ARE IN VERY GOOD CONDITION............. 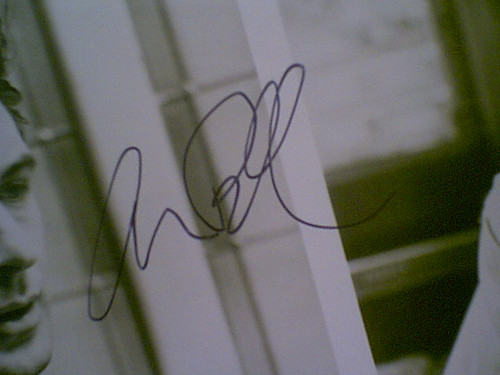