W.H.Auden-"Homage To Clio"-1960-Random House-5 1/2" X 9"-91 pages-Hardcover Book-With Jacket-Signed By Author.W. H. Auden was a young, sensational English poet of the 1930s who became an elder statesman of Anglo-American literature by the time he died in 1973. He made his reputation while still at Oxford in the 1920s, and by the time he left England for New York to avoid World War II he was considered by many to be the spokes-poet of a generation -- an erudite, socially conscious and technically brilliant rising star. Once in America (1939), he wrote poems of all kinds (long and short), essays, films and speeches, as well as libretti and plays with more-than-just-pals Chester Kallman and Christopher Isherwood (respectively). He taught and lectured (he also kept up his relationship with Oxford) and became even more famous when won the 1948 Pulitzer for the long poem The Age of Anxiety. Critics and scholars still consider Auden one of the 20th century's great poets, but few of his poems are familiar to mainstream audiences. He spent his last years in New York, at Oxford and in Vienna, Austria (where he died). His poetry gained new notice in recent years, thanks to the film Four Weddings and a Funeral, which features Auden's poem "Funeral Blues" ("Stop all the clocks, cut off the telephone"). His works include Poems (1930), Look, Stranger! (1936, also known as On This Island) and The Shield of Achilles (1955, winner of the National Book Award) The book has been autographed on the title page by W H Auden with a fountain pen in brown............BOTH BOOK AND AUTOGRAPH ARE IN VERY GOOD CONDITION.BOTTOM OF FRONT COVER HAS A SMALL TEAR. 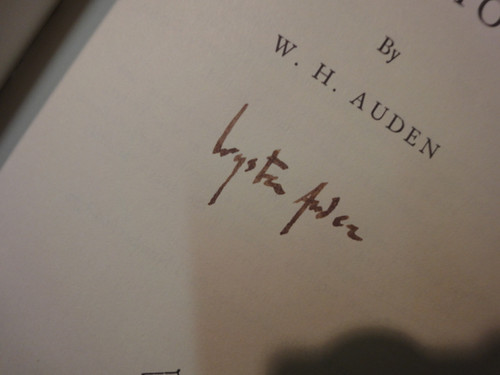