Gene Autry-"Songs Gene Autry Sings"-1942-Western Music Pub-9" X 12"-51 pages-black and white-songbook.This vintage songbook features rare photos of Gene Autry. Words and music included in the songbook are-Be Honest With Me,Back IN The Saddle Again,God Must Have Loved America,Good Old Fashioned Hoe-Down,Under Fiesta Stars,Tears On My Pillow plus more!Gene Autry (1907-1998) is one of the few actors who can be safely attributed with creating a whole genre of movie. As a successful recording artist in the early 1930s  with a monster hit ("That Silver Haired Daddy of Mine") propelling his career  he was brought out to Hollywood in 1933 with singer-comedian Smiley Burnette to provide a musical interlude in a low-budget Ken Maynard western. Autry's scene, calling a square dance, proved so popular with audiences that the producers decided to try and build a film around him, as a cowboy hero who also sang, with Burnette cast as his side-kick. The result was the creation of a new film genre and a new kind of hero: the singing cowboy. Other actors playing cowboys, including Maynard, had sung occasionally in their movies, but Autry's movies were structured around his musical abilities as much as his acting or horsemanship. The fact that Gene Autry the actor always played a character named Gene Autry allowed the attributes of the man to mix with those of the role. The Gene Autry westerns were all set in the "modern west," with cars, jeeps, and planes sharing screen time with horses and cattle. Autry the singing cowboy hero never hit anyone smaller than he was, never took advantage of the weakness of someone else, never sought revenge, was always polite to women, and was friendly and understanding to children. He was as quick with a song as he was with a gun, and he never shot first, no matter what the provocation.The souvenir songbook has been autographed on the front by Gene Autry with a fountain pen in blue........................................BOTH SOUVENIR SONGBBOOK AND AUTOGRAPH ARE IN VERY GOOD CONDITION........... 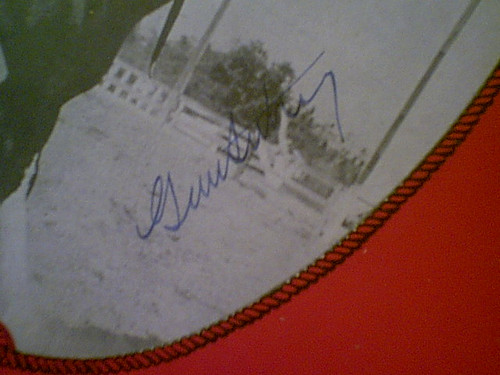