Gene Autry-"Songs And Scene From Republic Pictures"-1940-8 1/2" X 11"-15 pages-Western Music Pub-Souvenir Songbook. This vintage souvenir songbook is loaded with rare photos of Gene Autry in original scenes from his famous Republic Movies. The songbook also features the music and lyrics to-"As Long As I Have My Horse"..."Dude Ranch Cow Hands"..."neath The Blue Montana Sky"..."I Just Want You"..."I'm Beginning To care".."The Old Trail"..."Rhythm Of The Hoofbeats".Autry, Gene (Orvon Grover Autry), 190798, American entertainer and businessman, b. Tioga Springs, Tex. Probably the most successful of the movies' singing cowboys, Autry began singing on the radio in Tulsa, Okla., during the 1920s. He later wrote or cowrote more than 250 songs, among them Back in the Saddle Again (1939) and Rudolph the Red-Nosed Reindeer (1948), and made some 600 recordings. He moved to Hollywood in the early 1930s and starred in his first film, Tumbling Tumbleweeds, (of nearly 100) in 1935. Autry, America's top Western star during 193743, usually played a singing, guitar-playing hero and rode his famous horse, Champion. After serving in World War II (194245), he resumed his film career and starred (195056) in a popular television program. Autry invested the fortune he amassed with skill, becoming the owner of many properties, including the California Angels baseball team. His collection of Western art and memorabilia is housed in the Autry National Center, Los Angeles.The souvenir songbook has been autographed on the front cover by Gene Autry with a fountain pen in green................BOTH SONGBOOK AND AUTOGRAPH ARE IN VERY GOOD CONDITION.............. 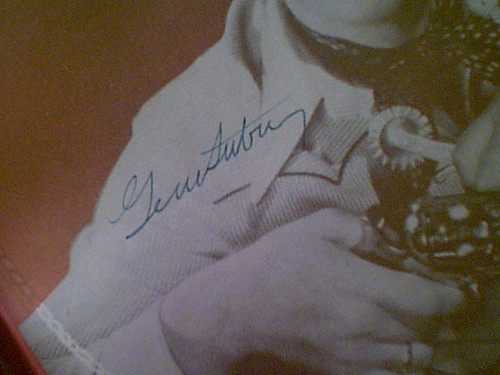