This item is a 10 1/2" X 15" page from the New York Sunday News Newspaper Magazine dated October 9, 1949. Please note-this is a magazine page only-there is no complete newspaper magazine. The newspaper magazine page features a color lithograph photo of Gene Autry.Orvon Gene Autry (September 29, 1907  October 2, 1998), better known as Gene Autry, was an American performer who gained fame as The Singing Cowboy on the radio, in movies and on television for more than three decades beginning in the 1930s. Autry was also owner of the Los Angeles Angels Major League baseball team from 1961 until his death; as well as a television station and several radio stations in southern California. Although his signature song was "Back In The Saddle Again," Autry is best known today for his Christmas holiday songs, "Here Comes Santa Claus" (which he wrote), "Frosty the Snowman," and his biggest hit, "Rudolph the Red-Nosed Reindeer."He is a member of both the Country Music and Nashville Songwriters halls of fame, and is the only celebrity to have five stars on the Hollywood Walk of Fame.The color lithograph photo has been autographed on the front by Gene Autry with a fountain pen in black..........BOTH PHOTO AND AUTOGRAPH ARE IN AVERAGE CONDITION.................... 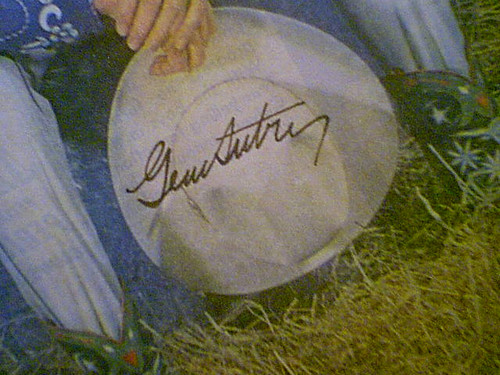