"The WikiLeaks Files-The World According to US Empire"-Introduction by Julian Assange-2015-Verso-6" X 9"-613 pages-Hardcover Book-Signed By Julian Assange......Assange, Julian Paul 1971–, Australian Internet journalist and activist, founder of WikiLeaks, a whistleblower website that publishes documents and images considered confidential or secret by governments and businesses. As a teenager, under the name Mendax, he became a programmer and hacker; he was charged with cybercrime in 1991 but received only a small fine. During the 1990s he engaged in various computer-related activities and studied at Melbourne Univ. Believing that collaborative secrecy characterizes institutions and that they can be disrupted by publicizing their internal secrets, he founded WikiLeaks in 2006. Its released information has included material on murders in Kenya and E Timor, Scientology, and the Guantánamo Bay prison camp, but the most notorious leaks are those that began in 2010 involving classified Pentagon materials on the Afghanistan and Iraq conflicts and classified U.S. State Dept. diplomatic traffic. The release of unedited material that reveals the names of (and thus endangers) confidential sources has been widely criticized. His 2010 arrest in England on Swedish sex-crime charges and the placement of financial and Internet restrictions on WikiLeaks led to cyber attacks by ostensible Assange supporters against websites associated with those actions; there also have been cyber attacks from unidentified quarters against WikiLeaks. After he lost his appeal of extradition to Sweden in the British courts, he sought refuge (2012) in Ecuador's London embassy while out on bail and was granted political asylum by Ecuador. In 2016, in what was widely regarded as an attempt to sabotage the presidential candidacy of Hillary Clinton, WikiLeaks released Democratic party materials reportedly stolen at the behest of the Russian government. Unable to proceed, Sweden dropped its investigation and extradition request in 2017, but Assange still faced arrest in Britain for violating his bail and possible extradition to the United States. Ecuador subsequently granted him citizenship and unsuccessfully sought diplomatic status for him. In 2019 Ecuador accused him of violating the terms of his asylum and revoked it and withdrew his citizenship. He was arrested and convicted of violating the terms of his bail, and the United States sought to extradite him, charging he had aided the break-in of a classified government computer and subsequently charging him with obtaining and publishing classified documents. Sweden also reopened the case against him, but closed it late in 2019 for insufficient evidence. The controversial Assange is considered by some a criminal endangering both governments and individuals and by others a hero devoted to revealing vital hidden truths. The book has been autographed on the title page by Julian Assange.......................BOTH BOOK AND AUTOGRAPH ARE IN EXCELLENT CONDITION. 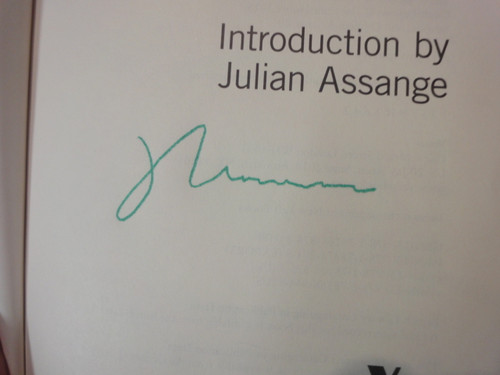