John Ashcroft-"Never Again"-2006-Center Street-6" X 9 1/2"-294 pages-Hardcover Book-With Jacket-First Edition- Signed By Author.Ashcroft, John, 1942, American political figure, b. Chicago, grad. Yale Univ. (B.A., 1964), Univ. of Chicago School of Law (J.D., 1967). A conservative Republican, Ashcroft was Missouri state auditor (197576) and attorney general (197685) before being twice elected to the post of governor (198593). He served as a U.S. senator from Missouri (19952001) but was defeated in his bid for a second term. In his various political offices, Ashcroft expressed staunchly conservative views, opposing abortion and gun control and favoring the death penalty. Under President George W. Bush, he served (20015) as U.S. attorney general. Despite some strong protests because of Ashcroft's right-wing views, he was confirmed by the Senate after a vote in which most Democrats opposed his nomination. Although he was again an advocate of conservative social positions as attorney general, he was most noted for seeking, in the wake of the Sept. 11, 2001, terror attacks, to eliminate what he saw as hindrances to a strong, sometimes sweeping law enforcement approach to combating terrorism.The book has been autographed on the title page by John Ashcroft...............BOTH BOOK AND AUTOGRAPH ARE IN VERY GOOD CONDITION. 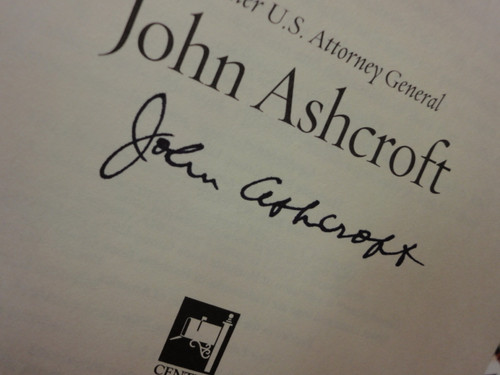