This item is an 8" X 10",black and white photo of Fred Astaire in the 1936 RKO Movie-"Swing Time".Swing Time is a 1936 RKO musical comedy film set mainly in New York City and stars Fred Astaire, Ginger Rogers, Helen Broderick, Victor Moore, Eric Blore and Georges Metaxa, with music by Jerome Kern and lyrics by Dorothy Fields. The film was directed by George Stevens.Swing Time is considered to be Astaire and Rogers' best dance musical, featuring four dance routines that are each regarded as masterpieces of their kind. "Never Gonna Dance" is often singled out as the partnership's and collaborator Hermes Pan's most profound achievement in filmed dance, while "The Way You Look Tonight" won the Academy Award for Best Original Song and went on to become Astaire's most successful hit record, scoring first place in the U.S. charts in 1936. Kern's score, the second of three he composed specially for Astaire, contains three of his most memorable songs.The photo has been autographed on the front by Fred Astaire...........BOTH PHOTO AND AUTOGRAPH ARE IN VERY GOOD CONDITION. 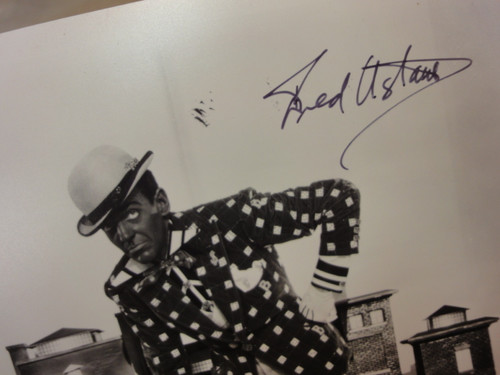