"A Foggy Day"-1937-Chappell-sheet music.This sheet music originally sold for sixty cents.A Damsel in Distress (RKO) is a 1937 English-themed Hollywood musical comedy film starring Fred Astaire, Joan Fontaine, George Burns, and Gracie Allen. With a screenplay by P. G. Wodehouse, loosely based on his novel of the same name, music and lyrics by George and Ira Gershwin, it is directed by George Stevens. It is the second (and last) Astaire musical directed by Stevens; the first was Swing Time.The sheet music has been autographed on the front by Fred Astaire with a fountain pen in red,George Burns with a fountain pen in blue and Gracie Allen with a fountain pen in black........BOTH SHEET MUSIC AND AUTOGRAPHS ARE IN VERY GOOD CONDITION. 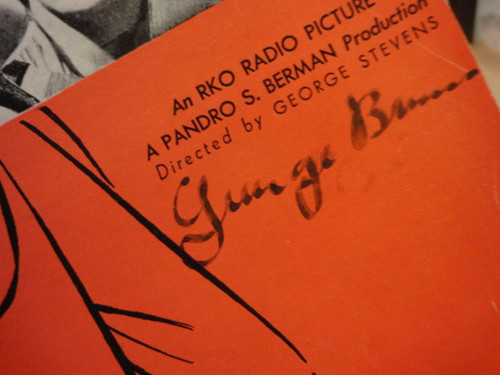