"Angel"-1945-Miller Music-sheet music.Yolanda and the Thief is a 1945 American Technicolor MGM musical-comedy film set in a fictional Latin American country, and stars Fred Astaire, Lucille Bremer, Frank Morgan, and Mildred Natwick, with music by Harry Warren and lyrics by Arthur Freed. The film was directed by Vincente Minnelli and produced by Arthur Freed. The film a long-time pet project of Freed's to promote his lover Bremer's career fared disastrously at the box office. An attempt to create a whimsical fantasy, it ended up, in the words of critic John Mueller, as "egg-nog instead of the usual champagne". Despite admirable production values, it ruined Bremer's career and discouraged Astaire, who decided to retire after his next film, Blue Skies. The sheet music has been autographed on the front cover by Fred Astaire with a fountain pen in red.......................BOTH SHEET MUSIC AND AUTOGRAPH ARE IN VERY GOOD CONDITION. 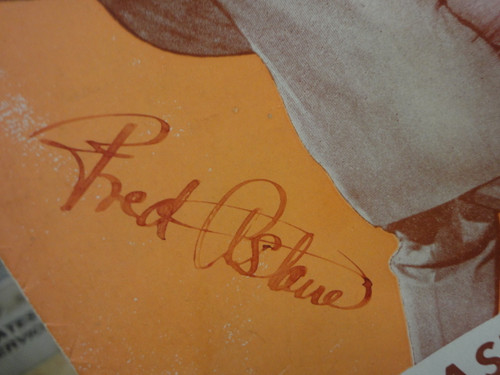