This item is an 8" X 10",black and white photo of Ed Asner and Daniel J. Travanti in two scenes from the 1983 television movie-"A Case Of Libel".A Case of Libel was adapted from the 1953 Broadway play by Henry Denker. The story was inspired by the real-life courtroom battle between journalists Quentin Reynolds and Westbrook Pegler. Gordon Pinsent plays a liberal news correspondent who has performed heroically in World War II. Nonetheless, he is characterized as a drunkard and a Communist sympathizer by ultraconservative columnist Daniel J. Travanti. With the help of brilliant attorney Edward Asner (based on the actual case's Louis Nizer), Pinsent brings a libel suit against Travanti. The climax, in which Travanti is tripped up by his own contradictory writings, was in reality based on a small portion of the Reynolds/Pegler litigation, but it provides a satisfactory "sauce for the goose" third act. A Case of Libel had previously been adapted for television in 1969, with Jose Ferrer and Arthur Hill in the cast.The photo has been autographed on the front by Ed Asner and Daniel J. Travanti............BOTH PHOTO AND AUTOGRAPHS ARE IN EXCELLENT CONDITION..................... 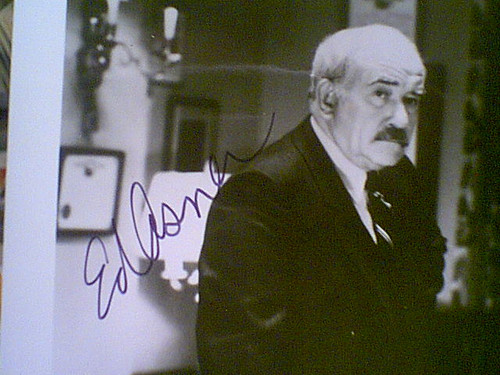