Life Magazine-September 20,1968. This vintage Life Magazine-which originally sold for forty cents-features a color cover photo of Arthur Ashe plus an article with photos.Arthur Ashe was a tennis star of the 1960s and '70s and an African-American pioneer: the first black man to win at the U.S. Open and Wimbledon. He scored many other firsts in his career, including becoming the first African-American on the U.S. Davis Cup team in 1963. Ashe played tennis at UCLA and was national collegiate champion in 1965. He won three major tournaments in his career: the U.S. Open (1968), the Australian Open (1970) and Wimbledon (1975). Ashe retired in 1980 and was elected to the Tennis Hall of Fame in 1985. In 1988 he discovered he had AIDS, probably having gotten the HIV virus from a blood transfusion during heart surgery in 1983. Ashe made the news public at a 1992 press conference and died the next year.Ashe served in the U.S. Army from 1966-68, reaching the rank of second lieutenant... Ashe's three-volume history of African-American athletes, A Hard Road To Glory, was published in 1988... His book Days of Grace: A Memoir was published in 1993... The main court of the National Tennis Center (home to the U.S. Open) is named Arthur Ashe Stadium... Ashe is sometimes compared with another tennis star who broke racial barriers, Althea Gibson.The Life Magazine has been autographed on the front cover by Arthur Ashe with a fountain pen in blue................BOTH MAGAZINE AND AUTOGRAPH ARE IN VERY GOOD CONDITION. 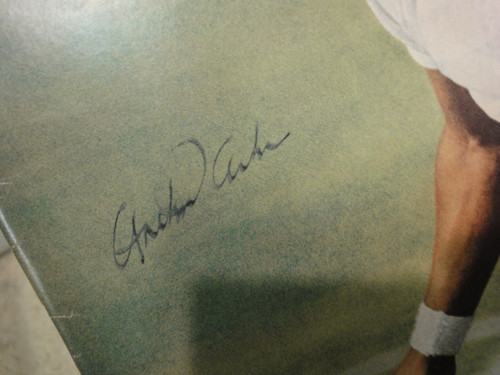