TV Guide Magazine-Dec. 10, 1966-Vol. 15-No. 50-Issue 715-31 pages. This vintage TV Guide Magazine-which originally sold for fifteen cents-features a color cover of actor James Arness plus an article with photos. James Arness (born James King Aurness, May 26, 1923  – June 3, 2011) was an American actor, best known for portraying Marshal Matt Dillon for 20 years in the CBS television series Gunsmoke. Arness has the distinction of having played the role of Dillon in five decades: 1955 to 1975 in the weekly series, then in Gunsmoke: Return to Dodge (1987) and four more made-for-television Gunsmoke films in the 1990s. In Europe, Arness reached cult status for his role as Zeb Macahan in the Western series How the West Was Won. He was the older brother of actor Peter Graves. The TV Guide has been autographed on the front cover by James Arness.................BOTH TV GUIDE AND AUTOGRAPH ARE IN VERY GOOD CONDITION. 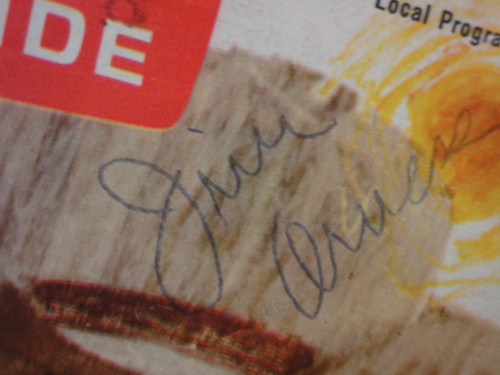