Lance Armstrong-"Every Second Counts"-2003-Broadway Books-6" X 9 1/2"-246 pages-Hardcover Book-With Jacket-Signed By Author.When he was 13, Armstrong won the Kids Iron Triathlon, an event combining swimming, biking, and running. He later began entering triathlons for money, winning $20,000 when he was 15. As a high school senior Armstrong qualified to train with the U.S. Olympic team. He later made cycling his sport. In 1993 he won ten titles and was called the Golden Boy of American Cycling. By 1996 Armstrong was the top-ranked cyclist in the world. But later that year, he was diagnosed with cancer and forced to undergo three operations and chemotherapy. The treatment was ultimately successful, and Armstrong became a powerful advocate for cancer research. He founded the Lance Armstrong Foundation to promote cancer research and awareness, and wrote the best-selling book It's Not About the Bike: My Journey Back to Life.The book has a cut signature by Lance Armstrong affixed to the title page of the book. The cut signature is 1" X 4".............BOTH BOOK AND AUTOGRAPH ARE IN VERY GOOD CONDITION. 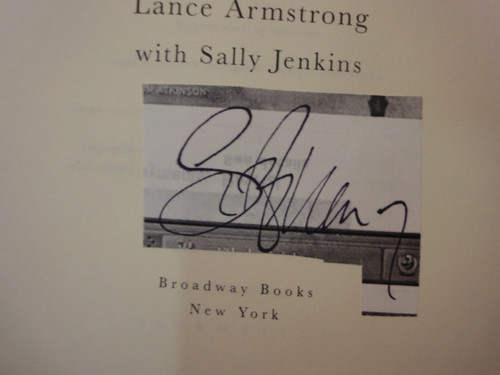