Lance Armstrong-"Every Second Counts"-2003-Broadway Books-6" X 9"-244 pages-Hardcover Book-With jacket-Signed BY Author. Lance Edward Armstrong (born Lance Edward Gunderson; September 18, 1971) is an American former professional road racing cyclist. Armstrong had won the Tour de France a (then) record seven consecutive times between 1999 and 2005 before being disqualified from those races and banned from competitive cycling for life for doping offenses by the United States Anti-Doping Agency (USADA) in 2012. He is the founder of the Livestrong Foundation, originally called the Lance Armstrong Foundation, which provides support for cancer patients.The book has been autographed on the title page by Lance Armstrong..............BOTH BOOK AND AUTOGRAPH ARE IN VERY GOOD CONDITION. 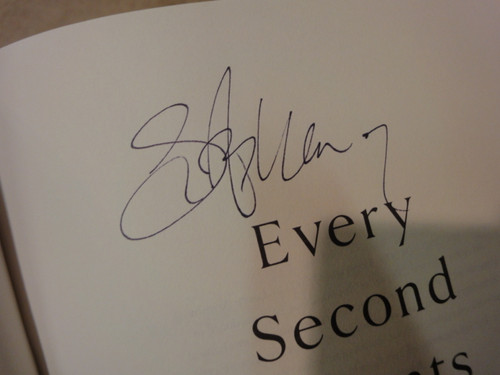