THIS IS AN AUTHENTICALLY AUTOGRAPHED LP BY CLIFF ARQUETTE.. CHARLIE WEAVER(COLUMBIA CL 1345)SINGS FOR HIS PEOPLE. PHOTO COVER IS SIGNED BY CHARLIE WEAVER. TRACKS: JUST GOT A LETTER FROM MAMA, ON THE BOARDWALK OF SNYDER'S SWAMP, FIGHT FOR SUBNORMAL YOU, GOMAR COME OUT OF THAT SEWER, WE'LL SIGN THE PARDON FOR WALLACE SWINE, IRISH IN MT IDY, THESE ARE MY PEOPLE, IT'S CUMQUAT TIME IN MT IDY,MY IDY LULLABY, THEY'RE DRAINING SNYDER'S SWAMP IBN THE MORNING, XMAS IN MT IDY, HAPPY NEW YEAR. CONDITION OF THE VINYL,COVER, AND AUTOGRAPH IS VG. In 1959, Arquette accepted Paar's invitation to perform on Paar's NBC Tonight Show. Arquette depicted the character of "Charley Weaver, the wild old man from Mount Idy." He would bring along, and read, a letter from his "Mamma" back home. This characterization proved so popular that Arquette almost never again appeared in public as himself, but nearly always as "Charley Weaver", complete with his squashed hat, little round glasses, rumpled shirt, broad tie, baggy pants and suspenders. Although a good amount of Arquette's jokes appear 'dated' now (and, arguably, even back then), he could still often convulse Paar and the audience into helpless laughter by way of his timing and use of double meanings in describing the misadventures of his fictional family and townspeople. As Paar noted, in his foreword to Arquette's first "Charley Weaver" book: "Sometimes his jokes are old, and I live in the constant fear that the audience will beat him to the punch line, but they never have. And I suspect that if they ever do, he will rewrite the ending on the spot. I would not like to say that all his jokes are old, although some have been found carved in stone. What I want to say is that in a free-for-all ad lib session, Charley Weaver has and will beat the fastest gun alive." {Charley Weaver's Letters From Mamma, pgs. 5 - 6] 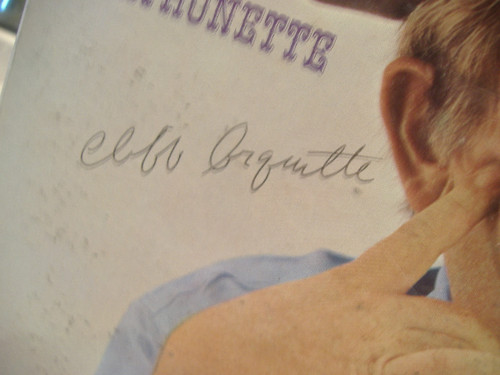