"Message From The President Of The United States"-April 2,1884-48th Congress 1st Session-Document No. 130-"Imprisonment of American Citizens"-6" X 9"-32 pages pamphlet-Signed By President Chester Arthur.Vice President Chester Alan Arthur became President on September 20, 1881, after the death of President James Garfield. Trained as a lawyer, Chester A. Arthur had long been a leader in Republican party politics; he had helped to secure the nomination of U.S. Grant in 1868. Arthur had a respectable administration whose primary achievement was civil service reform, notable because of his previous reputation for cronyism. Arthur lost his bid for reelection in 1884 to Democrat Grover Cleveland. Arthur, who suffered from Bright's disease and hypertension, returned to the practice of law as his health failed. He died of a cerebral hemorrhage in 1886.The pamphlet has been autographed on the front by Chester Arthur with a fountain pen in faded black ink.................BOTH PAMPHLET AND AUTOGRAPH ARE IN VERY GOOD CONDITION. 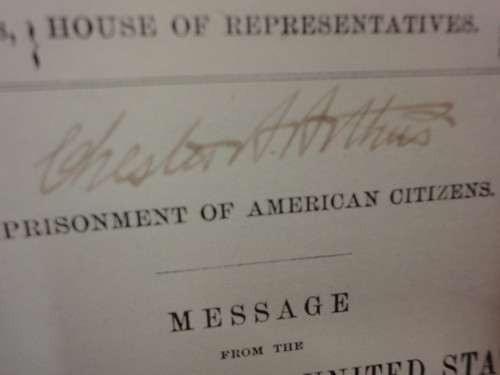