"Anyone Can Play"-1968-Famous Music Corp-sheet music. This song is featured in the 1967 Paramount movie "anyone Can Play" starring Ursula Andress,Virna Lisi and Claudine Auger.Yet another entry in a long series of 1960s Italian sex comedies, this one has some clever moments in its study of four beautiful women (Ursula Andress, Marisa Mell, Virna Lisi, and Claudine Auger) who cheat on their husbands to relieve their marital discontent. Jean-Pierre Cassel also stars in this typical anthology written by Ruggero Maccari and Ettore Scola........In 1957, Ursula Andress married American actor John Derek, who supervised every aspect of her career in much the same way that he'd later mold Bo Derek. The marriage ended unhappily, although the couple remained friends. She became an international sensation through her bikini-clad appearance as Honey Rider in the first James Bond movie Dr. No (1962), a role for which she was paid 10,000 dollars. Within a year, Andress was sharing billings with Frank Sinatra and Dean Martin in Four for Texas, and Elvis Presley in Fun in Acapulco (both 1963); she also posed for a now much-sought-after nude layout in Playboy magazine. After this her burst of super-celebrity, Andress settled into a series of increasingly humdrum films. During the making of 1981's Clash of the Titans, she linked up with the film's much younger leading man Harry Hamlin, who became the father of her child. Although Andress continued to make movies in the 1980s and '90s, she remained what she was in 1962: a stunning beauty of modest talents.This sheet music originally sold for eighty five cents. The sheet music has been autographed on the front cover by Ursula Andress in red,Virna Lisi in black fountain pen and Claudine Auger in blue........BOTH SHEET MUSIC AND AUTOGRAPHS ARE IN EXCELLENT CONDITION.............. 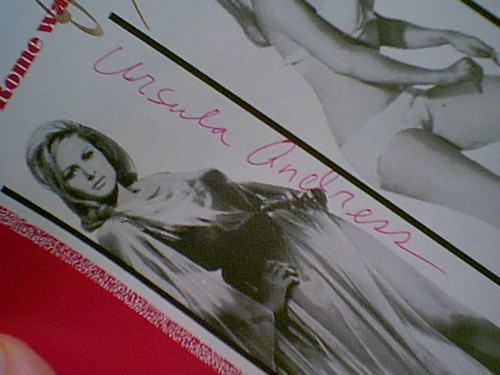