This item is a 9 1/2" X 15",color lithograph photo of Pamela Anderson.Pamela Anderson first became a star in the cast of the TV show Baywatch, where she played lifeguard C.J. Parker from 1992-96. She also posed for Playboy magazine, adding to her notoriety and positioning her perfectly for the Internet pinup boom of the mid-1990s. Anderson's wild blonde mane and spectacular store-bought bosom made her one of the Web's most-requested and most-downloaded stars (as well as a dependable punch line for comedians and talk show hosts). Her on-again, off-again marriage to rock star Tommy Lee and later romantic relationship with music star Kid Rock also became favorite topics for tabloids. (She and Kid Rock were engaged in 2002, broke it off in 2003, and then reunited and were married on 29 July 2006.) Anderson's film appearances include Barb Wire (1996) and Scary Movie 3 (2003, with fellow bombshell Jenny McCarthy). She also starred in the short-lived TV series, V.I.P. in the late 1990s and provided the voice for the animated series Stripperella. In 2004 she published Star, a novel which seemed to be closely based on her own Hollywood career, and in 2005 she starred in her own comedy television series, Stacked. Anderson began dating pop singer Kid Rock in 2001, and the two were married for four months in 2006. Anderson married Rick Salomon, a home video entrepreneur and former Paris Hilton boyfriend, on 6 October 2007; that marriage was annulled in March of 2008.The color lithograph photo has been autographed on the front by Pamela Anderson...........BOTH PHOTO AND AUTOGRAPH ARE IN VERY GOOD CONDITION. 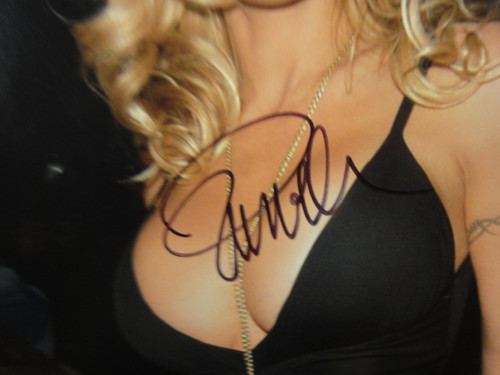