This item is an 8" X 10",black and white photo of Pamela Anderson and Yasmine Bleeth in a scene from "Baywatch".Baywatch is an American action drama series about the Los Angeles County Lifeguards who patrol the beaches of Los Angeles County, California, starring David Hasselhoff. The show was canceled after its first season on NBC, but survived and later became one of the most watched television shows in the world. The show ran in its original title and format from 1989 to 1999, except for the 19901991 season, during which it was not in production. From 1999 to 2001, with a setting change and large cast overhaul, it was known as Baywatch Hawaii.The photo has been autographed on the front by Pamela Anderson and Yasmine Bleeth...........BOTH PHOTO AND AUTOGRAPHS ARE IN VERY GOOD CONDITION. 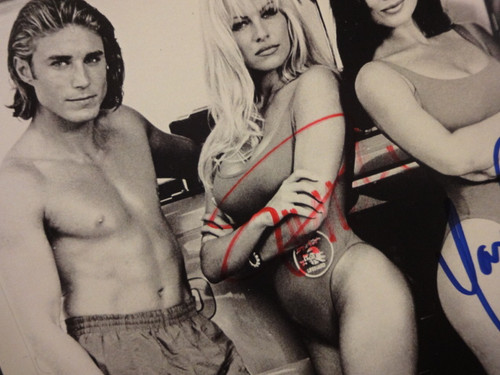