THIS IS AN AUTHENTICALLY AUTOGRAPHED LP BY MARIAN ANDERSON... MARIAN ANDERSON SINGS SPIRITUALS-FRANZ RUPP AT THE PIANO(RCA LM 110) 10" LP. PHOTO COVER IS SIGNED BY MARIAN ANDERSON IN BROWN FOUNTAIN PEN. TRACKS:NOBODY KNOWS THE TROUBLE I SEE, HEAR DE LAM['S A CRYING, MY LORD WHAT A MORNING, WERE YOU THERE, ON MA JOUIRNEY, DE GOSPEL TRAIN, SOOON A WIKLL BE DONE, SINNER PLEASE, HONOR, RIDE ON... CONDITION OF THE VINYL,COVER, AND AUTOGRAPH IS VG. Marian Anderson (February 27, 1897 – April 8, 1993),[1] was an American contralto, perhaps best remembered for her performance on Easter Sunday, 1939 on the steps of the Lincoln Memorial in Washington, D.C.. Anderson was born in Philadelphia, Pennsylvania, the daughter of John Rucker Anderson and the former Anna Delilah Rucker. Two sisters followed young Marian, Alice (later spelled Alyce) (1899-1965) and Ethel (1902-1990) who also became singers. Ethel Anderson was mother to James DePreist. Marian Anderson joined a junior church choir at the age of six, and applied to an all-white music school after her graduation from high school in 1921, but was turned away because she was black. The woman working the admissions counter replied, "We don't take colored" when she tried to apply. Consequently, she continued her singing studies with a private teacher. She debuted with the New York Philharmonic on August 26, 1925 and scored an immediate success, also with the critics. In 1928, she sang for the first time at Carnegie Hall. Her reputation was further advanced by her tour through Europe in the early 1930s where she did not encounter the racial prejudices she had experienced in America. 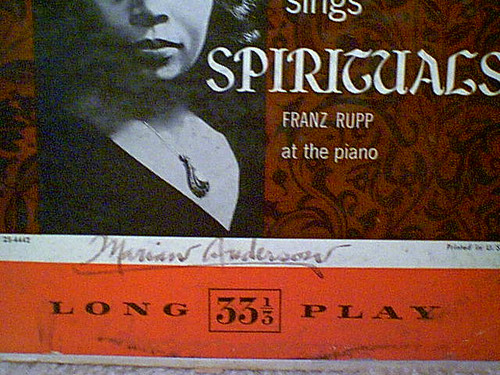