THIS IS AN AUTHENTICALLY AUTOGRAPHED PHOTO BY KEITH ANDES.. THIS IS A 5 INCH BY 4 INCH BLACK AND WHITE PHOTO SIGNED BY KEITH ANDES. 1950s and 60s second lead actor Keith Andes fits into the strappingly handsome and virile mold that encompassed the likes of George Nader, Guy Madison, and Jeffrey Hunter. Although he may not be as well remembered as the aforementioned, he managed to maintain a reliable career on radio (from age 12), stage, TV and films for over three decades. Born John Charles Andes on July 12, 1920, in Ocean City, New Jersey, Keith found work on radio singing and acting throughout his high school years. While serving with the Air Force during WWII, he performed in the patriotic 1943 Broadway stage show "Winged Victory" and, after being seen by studio mogul Darryl F. Zanuck, was given a minor part in the film version the following year. Keith returned to Hollywood in the post-war years and won the role of one of Loretta Young's brothers (the others being Lex Barker and James Arness) in the classic film The Farmer's Daughter (1947). His enviable physique and photogenic good looks made the blond looker an obvious choice to continue in both rugged adventures and beefcake drama but his output was fairly minimal. In Clash by Night (1952), one of his best roles, he dallied hot and heavy with a young Marilyn Monroe and in Blackbeard, the Pirate (1952) he demonstrated some expert swashbuckling skills. Meanwhile on the musical front, Keith proved he had a resilient baritone. He won a Theatre World Award for "The Chocolate Soldier" in 1947, and subsequently starred in "Kiss Me Kate" with Anne Jeffreys of TV's "Topper" (1953) fame. More notably he appeared opposite Lucille Ball in her only Broadway musical "Wildcat" in 1960, winding things up playing Don Quixote for over 400 performances in "Man of La Mancha" in 1968. Ironically, the movie studios did not take advantage of his musical prowess, appearing in a bland role with 'Jane Powell (I)' and singing one musical number in The Girl Most Likely (1957). Beside numerous episodic appearances, he appeared in two television series: "This Man Dawson" (1959) and the sitcom "Glynis" (1963), the latter starring popular Brit actress Glynis Johns. Both were short-lived. Slowing down by the 1970s, he appeared very infrequently on camera while finding occasional voiceover work. Sadly, his final years were marred by extreme ill health, including bladder cancer, and he committed suicide in his Santa Clarita, California home at age 85. CONDITION OF THE PHOTO AND AUTOGRAPH IS VERY GOOD. 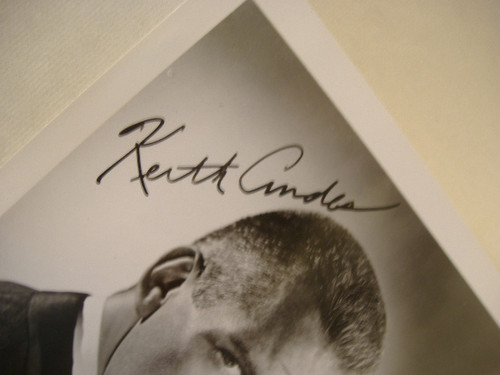