This item is an 8" X 11" cardboard color photo of actress Gillian Anderson in a scene from the television series-"The X Files". The photo is from 20th Century Fox Television.Gillian Anderson made her film debut in 1992 with the low-budget drama The Turning. She then appeared in a theatrical production of The Philanthropist and after that moved to Los Angeles. Though she was frequently courted for television roles, Anderson disdained the medium until the X-Files audition came along. Though the producers were looking for a brainy version of a Baywatch girl, the beautiful but more natural looking (having long passed her outrageous days) Anderson got the role thanks to the insistence of the show's creator Chris Carter. The show became a smash hit within two seasons and Anderson found herself an international star, as did her co-star David Duchovny, the subject of numerous pages on the Internet, and the recipient of such awards as a Golden Globe, an Emmy, and a Screen Actors Guild Award. In addition to continuing work on the X-Files, Anderson hosted a couple of television specials, including More Secrets of the X-Files and the BBC documentary series Future Fantastic. She also lent her voice as a documentary narrator on Spies Above and as a guest character on the television series The Simpsons and Reboot. The color photo has been autographed on the front by Gillian Anderson................BOTH PHOTO AND AUTOGRAPH ARE IN VERY GOOD CONDITION...... 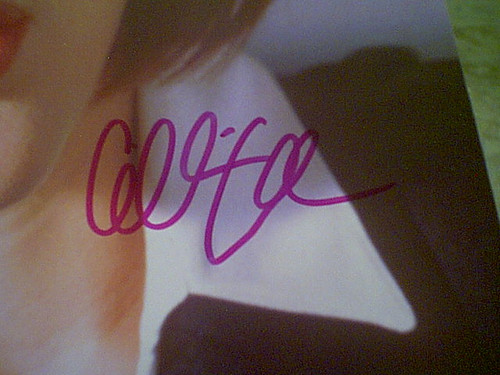