"Teen" Magazine-April 1961-82 pages. This vintage Teen Magazine-which originally sold for twenty five cents-features a color cover photo of Annette Funicello. The magazine also features a four page article with photos of Annette.The "sweetheart" of TV's The Mickey Mouse Club, American entertainer Annette Funicello began performing at age 10. The Disney people themselves sensed that Funicello had star quality, building several musical numbers around her on The Mickey Mouse Club and fashioning her own Club show-within-a-show miniseries, appropriately titled "Annette." Funicello's post-Mickey Mouse career was far more successful than that of many of her fellow Mouseketeersand the reasons cannot be charged up to looks alone. She also was guest-starred on the Disney TV series Zorro and Wonderful World of Color, and was given sizeable roles in such Disney theatrical features as The Shaggy Dog (59) and Babes in Toyland (61).While still under contract to Disney, Funicello began appearing in American-International's Beach Party series, usually co-starring with Frankie Avalon. Though these films were distinguished by undulating, bikinied females, Walt Disney decreed that Funicello never be involved in any "suggestive" sequencesnor were her two-piece bathing suits permitted to uncover her navel. After playing an extended cameo role as Davy Jones' sweetheart in The Monkees' film vehicle Head (68), Funicello cut down on her professional appearances, preferring to spend time with her family. During the 1970s, she became spokeswoman for a popular brand of peanut butter, her commercial appearances constituting the bulk of her on-camera time during this period. In 1987, she and onetime cohort Frankie Avalon co-financed and starred in the nostalgic musical film Back to the Beach. The Teen Magazine has been autographed on the front cover by Annette............BOTH MAGAZINE AND AUTOGRAPH ARE IN VERY GOOD CONDITION.................. 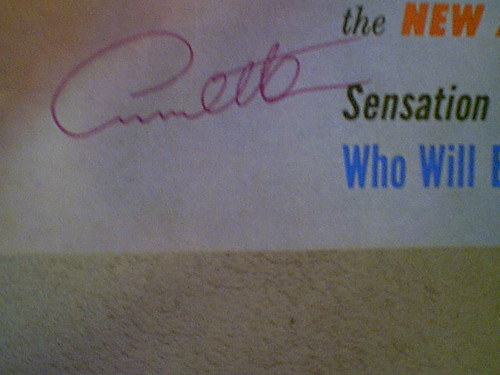