Original Soundtrack-"Babes In Toyland"(Vista 4022)-LP. This soundtrack LP features the 1961 Walt Disney Movie-"Babes In Toyland" starring Annette Funicello. The LP features a gatefold cover with photos.The "sweetheart" of TV's The Mickey Mouse Club, American entertainer Annette Funicello began performing at age 10. The Disney people themselves sensed that Funicello had star quality, building several musical numbers around her on The Mickey Mouse Club and fashioning her own Club show-within-a-show miniseries, appropriately titled "Annette." Funicello's post-Mickey Mouse career was far more successful than that of many of her fellow Mouseketeersand the reasons cannot be charged up to looks alone. She also was guest-starred on the Disney TV series Zorro and Wonderful World of Color, and was given sizeable roles in such Disney theatrical features as The Shaggy Dog (59) and Babes in Toyland (61).The LP has been autographed on the front cover by Annette Funicello............CONDITION OF VINYL, COVER AND AUTOGRAPH IS STRONG VG....................... 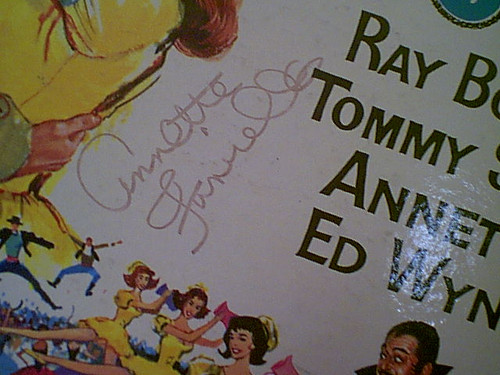